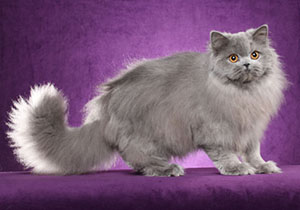 The British Longhair is now one of the many breeds of cat registered with the New Zealand Cat Fancy and was accepted by this organisation in 2020. The breed was developed from longhair kittens appearing in litters of the long-established British Shorthair breed.

The British are medium to large, powerfully built cats, with muscular, compact and cobby bodies with a broad, full chest, and short strong legs. The British Shorthairs have short, extremely dense plush coats with a crisp feel, the British Longhairs adds length to the dense coat so it stands out from the body emphasising the cat's imposing lines.So while the British Shorthair size is emphasised by its plush coat, the British Longhair cuts an imposing figure as the full coat swirls around the rounded muscular body.The classic Blue remains the most popular colour in the British, however the breed now comes in many colours. All British have round heads with short noses, chubby cheeks and prominent, rounded whisker pads which helps create a smiling face. Added to this, in most colours, are the large round eyes ranging from deep gold through to copper.

British cats are friendly and affectionate by nature yet undemanding.They are intelligent and quiet cats with a calm demeanour who make very loyal companions.And while not lap cats they do enjoy a snuggle beside you.