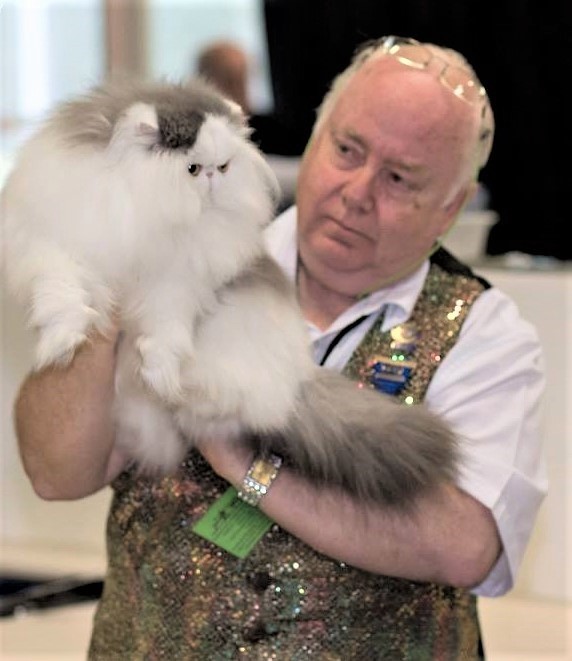 In his professional life, John has been a Credit Manager for more than 35 years and is currently Key Account Credit Manager for Porter Group, which is the largest heavy equipment hire company in the Southern Hemisphere. His involvement in the Cat Fancy began in the late 70’s, registering his first prefix ‘Imperatus’ with the NZCF in 1978, and shortly afterward was appointed Editor of ‘NZ Cats’ Magazine, when in 1980, he produced the first NZCF Yearbook. In the intervening years, John began by breeding Persians and Himalayans, extending to British Shorthairs, Burmese, Siamese, and Exotic Shorthairs. He bred NZ’s first Red Persian Grand Champion and first Himalayan Double Grand Champion. Later he granded a British Shorthair in CFA (USA), and bred Orientals, Foreign Whites and latterly Munchkins, culminating with 9 Grand Champions and taking one to All-Breed Cat of the Year in 2009.

In 1985, he passed his Long-hair Judges exams and began his judging career, later extending to cover all Short-hair breeds in 1990. He has held various positions such as Club Delegate, Secretary and/or President, of several NZ clubs, serving for a time as Northern Region Chairman and on the National Executive, and was ultimately elected as National President of the New Zealand Cat Fancy in 1992, serving on the CFA International Committee in 1993.  John is currently listed as an All-Breed Tutor Judge with the NZCF.

In 2009 John founded ‘The Harrison Weir Collection,’ and over the last decade has accumulated the world’s largest private collection of original antiquarian art, ephemera, and publications featuring the work of British listed artist, Harrison William Weir. John also manages and edits the educational web-site www.harrisonweir.com. This collection was later expanded to separately include historical items relating to the history of cat shows, honouring Harrison Weir’s role as the ‘Father of the Cat Fancy’.

In 2014, ‘The Harrison Weir Collection’ entered into a collaboration with ‘The CFA Foundation,’ which runs the Feline Historical Museum, based in Alliance, Ohio. This new collaboration included joint development of a new web-site at www.cat-o-pedia.org now well known as ‘The History Project,’ with Karen Lawrence, who is the Director of the Feline Historical Museum. John spends a great deal of his time writing many of the individual cat histories of the late 19th and early 20th century cats which may be found on this site.

When the World Cat Congress was held in New Zealand, John was invited to be one of the five guest speakers, delivering a presentation on Feline History. In April 2017 he spent a month in the UK on a research tour, collecting material for a new in-depth biography of Harrison Weir, while concurrently giving presentations to history groups, on the art, life and passions of the Father of the Cat Fancy.

John was recently invited to serve on the CFA Foundation’s Board of Directors, with whom he is now working to further the aims and future direction of the CFA Foundation and the Feline Historical Museum. In 2018 he spent a week in the Museum doing historical research after giving a series of four history presentations in the Education Ring at the CFA International Show.

With the arrival of Covid restrictions in 2020, he launched the new e-magazine ‘Felis Historica’ as a platform for disseminating both feline-related history and current affairs on an International scale. The magazine provides over 100 pages monthly of topical information on breeds, genetics, and other feline related issues relative to both Domestic and Pedigreed cats.