The origins of the Devon Rex are similar to the Cornish, and was discovered in Devon, Southern England some 10 years later. However, when the two breeds were crossed, only normal-coated kittens were born and it was realised that the genes were quite individual. The body of the Devon Rex is hard and muscular, slender and of medium length. With a distinctive 'pixie-like' head shape, the cheek bones are wide and the muzzle is short with a whisker break. Ears are large and set low on the head. Eyes are also large and wide set. The coat is short, fine, curly and soft. It is actually hair rather than fur and can often be tolerated by allergy sufferers. The Devon Rex is a very playful breed, intelligent and affectionate. Dog-like, they tend to follow their owners around, wag their tails, and can learn to retrieve. They are also sociable, extrovert and talkative, with more of a 'chirrup' than a meow. 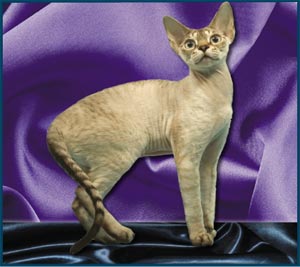